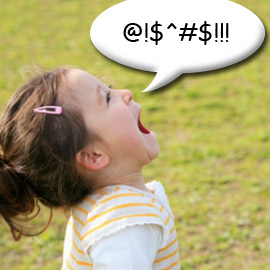 My children have never had a problem with cursing. My wife and I have tried our best to keep our language PG rated, but I admit to the occasional slip. Recently, there has been a significant uptake in my middle child's use of bad words.

It's not all the time and thankfully it only seem to be at home, but I wanted to find out where he was learning these words. I have a tablet and one of my son's favorite things to do is watch shows and other videos on YouTube.

I never really thought much of it, but when I was sitting in the living room one day, I overheard one of the videos he was watching. It was some kind of homemade rap video that was set to some old video game music. I thought it was pretty funny until I started hearing some seriously bad language. A lot of seriously bad language.

I stepped in and took the tab away and reminded him that he shouldn't be watching that. He apparently started out watching cartoons and then started clicking on the similar videos tab. As much as I would like to blame YouTube for the mishap, I realized it was my fault.

I assumed YouTube didn't do that, and I should have taken more time to look into it. The potty mouth has since subsided, but I don't let them watch YouTube anymore. Instead, Netflix kids is as far as they get to go.